Why Obama is in Deep Trouble 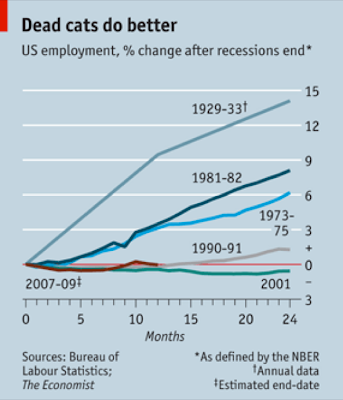 Click to Enlarge
Look closely, the 2008-2010 "recovery" is that short black flat line hugging the x-axis.

This recovery is the worst ever. Obama refused to go after a bigger stimulus in 2009. Obama has used the same guys who created the financial crisis as his "guides" to get him out (Tim Geithner, Ben Bernanke, Larry Summers, Robert Rubin... see here). This is the gang who said "deregulate" the banks (take down Glass-Steagal Act, don't rein in derivatives (what Warren Buffet called "financial instruments of mass destruction"), and were happy with Wall Street lobbyists acting as the fourth arm of government.

The fact that Obama did not turn to Keynesian stimulation but instead listened to the fools who created the problem with this "more tax cuts" and wishy-washy half measures is why the US economy is on the shoals and adrift with no power and no captain at the helm.

Clinton got it back in the 1990s: jobs, jobs, jobs. His administration saw a boom that make people richer and got the budget deficit under control (before Bush went on a tax-cutting spending spree... you gotta love those "deficit hawk" Republicans, they sure know how to spend money!). Obama came in a frittered away a year and half (so far) with no big push to get America back to work. Tragic.
Posted by RYviewpoint at 4:14 PM