The US and a "Lost Decade"

While Obama boasts about a recovery, serious economists are talking about a "lost decade" as the US sinks into a Japanese-style extended recession.

On the other hand, there is an article in the Washington Post by Neil Irwin that points out that the US has already had a "lost decade" as shown by the following:

They also have a graphic that shows the details of year-by-year growth and decline in jobs: 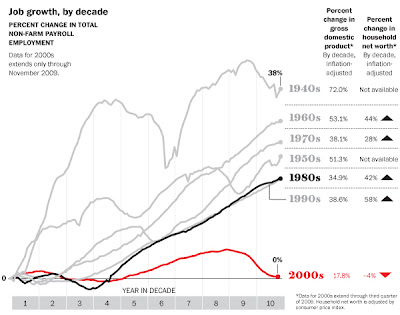 Click to Enlarge
This is pathetic. Worse, Obama dithers. Even worse, the idiot Republican party blocks any attempt to create a stimulus to get the economy out of a ditch. Shades of Hubert Hoover! Yes, the Republicans, the ones who brought you the Great Depression, are back working dillegently to turn the Great Recssion into the Great Depression II.

You can thank George Bush and his repeated tax cuts for the ultra-rich for the following. This is the opening of Neil Irwin's Washington Post article:

For most of the past 70 years, the U.S. economy has grown at a steady clip, generating perpetually higher incomes and wealth for American households. But since 2000, the story is starkly different.

The past decade was the worst for the U.S. economy in modern times, a sharp reversal from a long period of prosperity that is leading economists and policymakers to fundamentally rethink the underpinnings of the nation's growth.

It was, according to a wide range of data, a lost decade for American workers. The decade began in a moment of triumphalism -- there was a current of thought among economists in 1999 that recessions were a thing of the past. By the end, there were two, bookends to a debt-driven expansion that was neither robust nor sustainable.

There has been zero net job creation since December 1999. No previous decade going back to the 1940s had job growth of less than 20 percent. Economic output rose at its slowest rate of any decade since the 1930s as well.

He doesn't name names, but he should. All the media in the US should point out that the Republicans gutted the economy and that Obama is frittering away the opportunity to set things right.

The article blames the mess on an anonymous "we" when it should be saying George Bush, George Bush and his right wing crony Republicans:

"The problem is that we mismanaged the macroeconomy, and that got us in big trouble," said Nariman Behravesh, chief economist at IHS Global Insight. "The big bad thing that happened was that, in the U.S. and parts of Europe, we let housing bubbles get out of control. That came back to haunt us big-time."

Go read the article if you want a "standard" accounting of how the country went off the tracks. It gives an accounting of "anonymous" forces. It never names the politicians who pushed the corrupt policies. It never names the right wing economists who sold phony economics that led to deregulation and risk-taking. It never names Alan Greenspan for claiming that the US had "too much savings" at the end of the Clinton presidency and needed a big tax cut giveaway to the rich to ensure the bond market would have something to sell. (Remember: Keynes advised to reduce debt in good times so that you could use debt in bad times to replace the missing purchases by consumers. Ah... but Keynes was a pinko-economist. Right?)

The financial crisis is, for all practical purposes, over, and forecasters are now generally expecting the job market to turn around early in 2010 and begin creating jobs. The task ahead for the next generation of economists is to figure out how, in a decade that began with such economic promise, things went so wrong.

The reality is quite different. We are now 2/3 the way through 2010 and there has been no increase in jobs. The unemployment rate remains high. It would be rising, but the "discouraged" workers keep dropping off the list because government doesn't count them. (It is as if you count cancer as a cause of death but not starvation. The US economy is starved of jobs, but the government only counts cancer patients, not starving.)
Posted by RYviewpoint at 6:43 AM