Canadian Viewpoint: The Myth of a US Stimulus

The following is taken from a Bank of Montreal economic report. It exposes the lie that the US stimulus package was "massive" and threatens the economy with big deficits:

Myth #2: Massive U.S. fiscal stimulus has not worked. Part of this statement actually is true; U.S. stimulus hasn’t really worked this cycle, partly because it hasn’t really been tried yet. Without fully going into the Paul Krugman end of the pool, there is a strong case to be made that the muchballyhooed $787 billion Obama stimulus package was far less than met the headlines. Measured on contribution to GDP, U.S. public sector spending and investment has barely added to growth in the past year, in stark contrast to Canada (Chart 2, more on Canada later) and even in contrast to past cycles (Chart 3). The so-called “massive” stimulus has actually added less directly to growth than during a typical year over the past three decades, and is a far cry from the true heavy-duty stimulus of the mid-1980s which backstopped that very strong recovery phase. 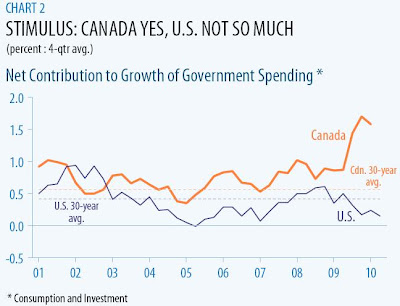 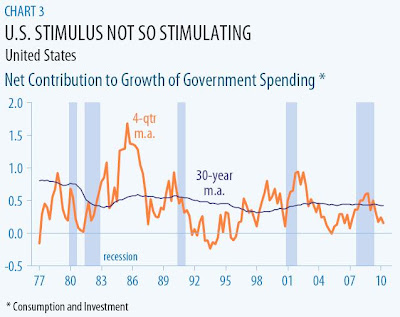 Whatever stimulus Washington has been pumping into the economy has been almost entirely offset by deepening cutbacks at the state and local level. This has become particularly evident in the recent jobs data, where an accelerating decline in non-census public sector employment has been one of the major reasons the labour market has begun cooling again. Just as the private sector has finally stopped shedding jobs on a year-over-year basis, the public sector has slashed 243,000 jobs in the past year outside of census workers (Chart 4). The bulk of these cuts have been at the local level, with teachers and other government workers axed in particular. This is why the $26 billion aid package for cash-strapped states, signed this week by the President, is so important. The cutbacks at the local level are in stark contrast to the Canadian situation, where provincial stimulus has instead amplified Ottawa’s actions. 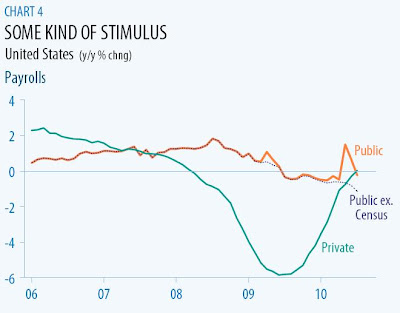 I side with Paul Krugman: the US did not stimulate enough and needs to stimulate more. The US Federal Reserve has a dual mandate of inflation control and jobs. They have ignored their mandate to encourage full employment. Instead, they are a tool of the ultra-rich who are more concerned about clipping coupons on their bonds (i.e. keeping inflation low) than the condition of the working class in America.
Posted by RYviewpoint at 8:06 AM

There are many who think that the stimulus was not enough and I think it should never have been capped or limited by a one time approach or a set figure. We should be in it to win with unlimited funds like the war department has. Who wants to limit spending on a battle and stop funding at the crucial moment when its win or lose? Like any war this one should be fought in an "all out" manner. If not, then you can expect to not be a sovereign nation any more and likely be slaves for the conquering nation. I think that if we don't fight this in that way we will be a third world nation and perhaps are almost there already .

From that last link from Paul Krugman's "America Goes Dark":
"Meanwhile, a country that once amazed the world with its visionary investments in transportation, from the Erie Canal to the Interstate Highway System, is now in the process of unpaving itself: in a number of states, local governments are breaking up roads they can no longer afford to maintain, and returning them to gravel.

And a nation that once prized education — that was among the first to provide basic schooling to all its children — is now cutting back. Teachers are being laid off; programs are being canceled; in Hawaii, the school year itself is being drastically shortened. And all signs point to even more cuts ahead."

I like the graphs showing the effect of the stimulus and how it compares to Canada.. I always learn when reading here.

Thomas: Yes, the US should go "all at it" to get out of the recession. It is amazing to only dabble at solving the problem.

I think Paul Krugman has nailed this issue (like he has so many others). He is a very smart guy who is ignored by seemingly all the politicians in Washington. It makes no sense, but they simply ignore his well thought out, well founded views. Instead they follow empty-headed know-nothings who were wrong in the past and are still wrong still today. Amazing!

Glad you enjoyed the graphs. As you can tell from the post, even the Canadian economists don't quite believe Krugman. But they take him far more seriously than most people in the US.

I find I generally get a better quality analysis of US events from Canadian commentators than I get from the run-of-the-mill US commentator.

I used to read more "foreign" news than I do now (funny how you can get into a habit or rut in what you read on the internet..), but they do give you a different perspective; kind of like getting a critique of your attire or speech. We need to know what we look like from another viewpoint and that would help us to see how foolish or how righteous we really are. I guess a person can put too much stock in what others think, though.

I often check out certain writers when I see a story or event and see what they think... One of them is Paul Krugman. I think he is honest and sees the values that should matter to all of us.

I knew that I had read your post on that article, but I did not have time to link it like I should have.... sorry, but I did read it the other day and then ran to work with out commenting..

Thomas: There are lots of interesting foreign news outlets.

BBC runs a news channel in the US.

Aljazeera runs a channel which is surprisingly good. (OK, maybe I shouldn't be too surprised, they hired a bunch of Canadians to help them set it up! But to be honest I expected more pro-Arab propaganda. They do lean pro-Arab but not to the point that the stuff is objectionable.)

RT is a Russian network that's on cable here in Canada. It is so-so. Lots of choices. Plus, I'm spoiled, since French is subsidized in Canada we get a lot of stuff not just from French Canada but from France.

I'm a big fan of Paul Krugman as well. If you haven't read his The Conscience of a Liberal, you should make time to read it.

Oh... and I just posted about a book on American history that I've just read that is written from professors teaching "American Studies" in Europe. Again, it is nice to get an "outside" perspective (even if one of the professors in an American living in Denmark, the other is a Greek teaching in Athens).

I will bookmark some of those outlets. I have read Aljazeera in the past and enjoyed some of it as I recall.
I need to read Krugman's book that you mention. Thanks for the links and all the other postings.

I must be confused but I read something from Al Jazeera I thought... I will try to remember. Anyway, I think the only channel we get here is the BBC and I think that is an American version. I am checking it out.. sorry about the previous comments misinformation.

Thomas: Don't worry about "having" to follow up on anything. I only offer suggestions for you to consider. You've got to decide what interests you and what you think about it.

The problem with today's world is that there is just too much good stuff out there. I always have a dozen library books around the house and am always trying to rush to finish them before they are due. The Internet is full of goodies. An the 80 cable channels I've got usually have something of interest somewhere. So we are all rich beyond a person's wildest dreams. The problem for a person today is where to spend the time!