Ezra Klein of the Washington Post has simplified the fight between Democrats and Republicans into one picture. You can see here what the tax cuts mean for each side... 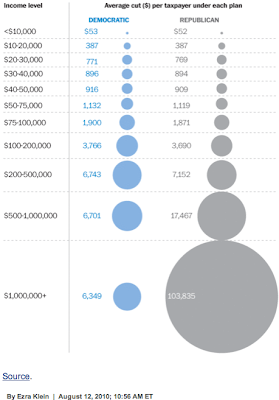 Click to Enlarge
Clearly the Democrats favour cutting taxes of everybody below the top 2% of the population. The Republicans want tax cuts, but the majority of their tax cuts goes to the ultra-rich. You would think this makes it obvious who the Republicans are working for. But the "spin doctors" would convince you that Obama is pure evil, not a citizen, hates business, and eats babies for breakfast. And incredibly a sizable portion of the American public believes this propaganda of the right!
Posted by RYviewpoint at 1:12 PM