Paul Krugman notes in his blog that Canadians are acting like Americans and that has him worried... 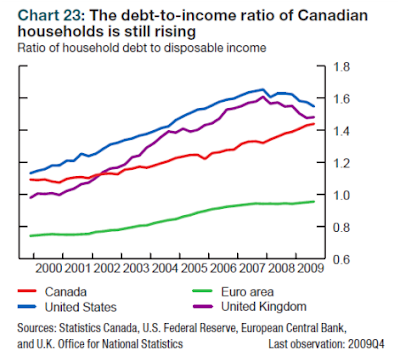 I think Krugman can relax a bit. Canadians have been increasing their debt load but from other reports such as this May 2010 CGA report, it appears that this debt level is manageable: 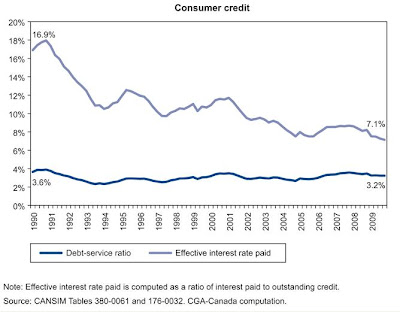 And, while house prices are still going up, this was partly an artifact of a change in tax regulations that took effect July 1. The housing market is in a correction with sales off and prices coming down. Even more significant, the above CGA report shows that mortgage debt load is sustainable: 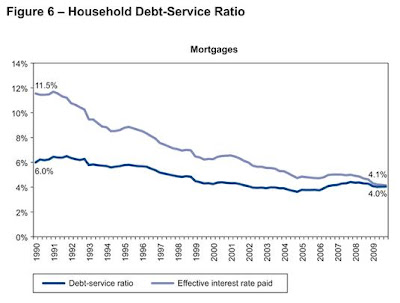 This same report shows the same growing debt load trend that Krugman finds worrisome. But the above graphs show that this larger debt is affordable given the current interest rate environment. Obviously as rates go up, the contracts will roll over and higher rates will apply. But looking at how the debt-service ratio over the last 10 years, it is clear that Canadians can manage a rise in interest rates because they have managed much high debt-service ratios in the past. The trick is for the economy to be stable and not undergo shocks like mass unemployment as in the US or a sudden dramatic rise in interest rates.

I know that Paul Krugman is a smart guy and that Brad DeLong's rule is that "Krugman is always right", but I think he is overly worried about Canada. If current debt trends continue for another 3-5 years with debt-service ratios rising, then I would agree that Canada is set up for a US-style fall. But given the current economic outlook, I think Canada is stable and consumers are OK.

In Canada, unlike the US under Greenspan, we have a central bank that does act as a regulator and they are watching things closely. Here's a bit from Bloomberg news.

Canadians are getting deeper into debt, fueling spending and increasing pressure on the Bank of Canada to raise interest rates even as growth slows. ...

Bank of Canada Governor Mark Carney, who raised his key interest rate for a second month to 0.75 percent on July 20, yesterday said the levels of indebtedness in the two countries are starting to “cross over” and he urged Canadians to consider their capacity to service debts as interest rates rise.

“Debt can’t grow to the sky,” Carney said. “Rates are extraordinarily low. That won’t always be the case, and people and financial institutions should manage their affairs such that individuals can carry debt at more normal costs of interest.”

Posted by RYviewpoint at 3:33 PM