I've been watching "cold fusion" since 1989. Recently I became aware of the Widom-Larsen theory. This appears to me to be the long-awaited explanation for the phenomenon.

There is an interesting April 17, 2010 interview with Lewis Larsen, co-developer of the Widom-Larsen theory. Ignore the first minute or so where the host "personality" messes around. Larsen has some interesting things to say. The host, Sandy Andrew is an over-the-top character who intrudes too much into the talk. Ignore him and focus on Lewis Larsen. (You can download the interview here.)

One of the most interesting bits occurs about 37 minutes into the interview when Larsen talks about collective effects and evidence that biology has anticipated the theory by several billion years, i.e. bacteria appear to use this effect to transmute elements needed for their growth. He also mentions that there is similar -- but different theory -- collective effects going on in photosynthesis.

Larsen gives a very reasonable discussion of why it is so difficult for science to respond to the new experimental results. He recounts the negative reactions to Michael Farady's experiments with electro-magnetism. He explains that LENR (Low Energy Nuclear Reactions) falls between current disciplines (it combines QED, condensed matter, nuclear, and plasma physics), so it requires collaboration and viewpoints which are not "normal". This typically causes a negative reaction. He also mentions Thomas Kuhn's classic book The Structure of Scientific Revolutions which discusses this negative reaction to "anomalous" experimental results.

In the talk, he mentions the independent NASA review of the Widom-Larsen theory. Here is a presentation created by the NASA physicist Zawodny. This presentation is fairly accessible to the informed general public. And it draws conclusions to show the potential of the impact of the new technology, e.g. a 747 jet outfitted with take advantage of LENR at a 1% efficiency rate would allow 2Kg H2 to fuel the plane on 9800km flight.

Update 2010aug12: There is a nice presentation of Widom-Larsen in the July 2010 issue of New Energy Times: Widom-Larsen Simplified. 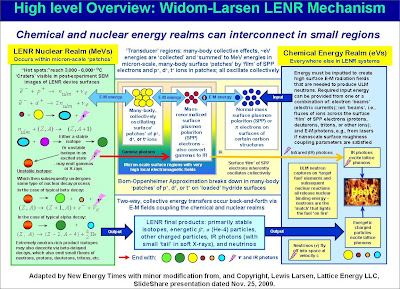 Update 2011may25 NASA is attempting to replicate experiments as part of an evaluation of the Widom-Larsen theory of LENR (Low Energy Nuclear Reactions).

The theory NASA is evaluating is the “Ultra-Low-Momentum Neutron Catalyzed Theory of LENRs” developed by Allan Widom and Lewis Larsen. New Energy Times has a dedicated “portal” page for information about this theory.

NASA researcher Joseph. M. Zawodny, along with this writer, have contributed the chapter “Widom-Larsen Theory: Possible Explanation of LENRs in the forthcoming Wiley Nuclear Energy Encyclopedia.

Update 2011jun07: Dennis Bushnell, Chief Scientist of NASA Langley was interviewed by EV World (here) and the interview has been transcribed by Steven B. Krivit in his LENR blog. Here are the bit published by Krivit:

J. William Moore: I’d like to [look at] some of the [energy alternatives] that you think look most promising from your perspective.

Dennis Bushnell: The most interesting, and promising, at this point, in the farther term, but maybe not so far, is low-energy nuclear reactions. This has come out of [22] years of people producing energy but not knowing what it is — and we think we have a theory on it. It’s producing beta decay and heat without radiation. The research on this is very promising and it alone, if it comes to pass, would literally solve both [the] climate and energy [problems.]

MOORE: I find it extremely exciting that there might be something here, so what is it that you think is going on at the atomic level here?

BUSHNELL: Let me back up a little. [Stanley] Pons and [Martin] Fleischmann came out with an experiment that they labeled “cold fusion” about 22 years ago which had replication issues at the time. Also, all of the fusion theorists came out and said absolutely “This is not fusion.” And, of course, they were exactly correct, this is not fusion.

They’ve gone through 20 years of massive experimentation worldwide, in almost every country, where they’ve been able to produce this effect. But all of the energy produced by these “cold fusion” experiments over the last 22 years didn’t produce enough heat to boil water for tea. So people didn’t get too interested in it and nobody knew what it was.

Back in 2005, 2006, [Allen] Widom [and Lewis] Larsen came out with a theory that said, no it’s not “cold fusion,” it’s weak interactions using the Standard Model of quantum mechanics, only the weak interaction part. It says that if you set up one of the cells, and you don’t have to use deuterium, hydrogen works fine, nickel works fine and you don’t need palladium.

If you set this up you produce an electron – proton connection producing ultra-weak neutrons and if you have the right targets out there you produce beta-decay which produces heat.

At that point, in 2006, 2007 we became interested and started setting up a set of experiments that we’re just about ready to start finally, where we’re trying to experimentally validate this Widom-Larsen theory to find out whether or not it explains what’s going on. And in the process, we used quantum theory to optimize the particular surface morphologies to do this.

Then, as you mentioned, in January of this year [Andrea] Rossi, backed by [Sergio] Focardi, who had been working on this for many years, and in fact doing some of the best work worldwide, came out and did a demonstration first in January, they re-did it in February, re-did it in March, where for days they had one of these cells, a small cell, producing in the 10 to 15 kW range which is far more than enough to boil water for tea. And they say this is weak interaction, it’s not fusion.

So I think were almost over the “We don’t understanding it” problem. I think we’re almost over the “This doesn’t produce anything useful” problem. And so I think this will go forward fairly rapidly now. And if it does, this is capable of, by itself, completely changing geo-economics, geopolitics of solving quite a bit of [the] energy [problem.]

MOORE: I think this was either last week or the week before last, I ran a story on this. I went and took a look at it – they were using hydrogen and nickel, I believe, using hydrogen gas and putting that into this device. In looking at the video and photographs, it looks to be about the size of a fist and that thing was running from about 10:45 in the morning till about 4:30 when they finally turned it off — and generating, I forget exactly what it was — but it was a significant amount of energy in the form of steam.

BUSHNELL: It produces heat and did so for days and was in the 12 or 14 kW range and they [will be] producing, with a large number of these devices, a 1 MW power plant.

MOORE: That’s a pretty exciting thing. Do you think that this theory that was developed — are these NASA scientists that were working on that theory?

BUSHNELL: No, the theory was developed by Widom and Larsen. Widom is a faculty member and teacher at Northeastern and Larsen has a company in Chicago.

MOORE: So that looks promising and so you can take and generate steam, and of course, that’s what a nuclear reactor or coal-fired power plant is all about. They’re just there to produce steam and turn a turbine and produce power.

BUSHNELL: Once you’ve got heat, you can do everything. We looked at using LENR to power a space-access rocket and it had better performance conceptually than a conventional nuclear thermal rocket.

Update 2011dec12: There is slow progress in realizing that the Widom-Larsen theory may account for anomalous heat generation. Here is a relevant post on the New Energy Times blog:

Akito Takahashi, a retired professor of nuclear engineering from Osaka University, and now affiliated with Technova Inc., is shifting his thinking about low-energy nuclear reactions.

And here is a presentation by Joseph Zawodny on 22-Sept-2011 at a NASA sponsored LENR Innovation Forum workshop at Glenn Research Center in Cleveland, Ohio. This presentation has a nice historical review and provides some context to the Widom-Larsen theory.
Posted by RYviewpoint at 9:19 AM

Your remarks about the substance of my interview with Sandy Andrew were very perceptive and insightful. Given the many-faceted interests evidenced in your collection of thoughtful blog postings, you may enjoy perusing an excerpt from a nontechnical Lattice white paper that I recently uploaded to SlideShare, “Commercializing low energy nuclear reactions (LENRs): cutting energy’s Gordian knot - a Grand Challenge for science and energy.” http://www.slideshare.net/lewisglarsen/cfakepathlattice-energy-llc-white-paper-excerptapril-12-2010 This ‘plain English’ excerpt from a rather long document provides Lattice’s strategic ‘view from 50,000 feet’ of the overall macroeconomic and geopolitical landscape of the present energy dilemma, how LENRs might fit into a societal portfolio of carbon-free ‘green’ energy technologies (assuming that LENRs can be commercialized), and what all this might mean over the long-run. In our opinion, “The Gordian knot facing humanity is not that our world will ever run-out of energy per se in the foreseeable future. Between global coal reserves and electromagnetic energy in the form of photons streaming from the sun there is more than enough energy to be had for whatever purpose. Energy availability, in the broadest possible sense, is not the Gordian knot …[it] is that worldwide consumers of energy need to have technologically usable, reasonably priced energy delivered to the right place at exactly the right time in forms that are environmentally benign and readily compatible with sustainable, long-term global economic growth.”

It seems to me that we must expect Widom Larsen Theory to have implications for the evolution of the terrestrial deuterium-protium ratio over time, if the theory is correct. Ordinary hydrogen absorbs neutrons. If the theory is correct, would we not expect to see evidence of rising deuterium to protium ratios over geologic time? Would we not expect to see anomalously high deuterium to protium ratios in water which has been in contact with metallic elements in ore deposits of certain metals? Does anyone know of such geochemical evidence, which might serve to confirm the theory?
HRG, March-30-2011.

You are not appreciating how difficult it is to initiate and sustain a Widom-Larsen process.

I'm not competent to give the physical details but I will point you at two things.

(1) Note this page on the New Energy Times web site.

(2) As for a more detailed explanation of the complexity of starting and sustaining a Widom-Larsen process, I suggest you look at the New Energy Times Widom-Larsen Theory Portal.

This reaction is subtle and difficult, so to expect it to be free running in nature and to change the protium-to-deuterium ratio is to assume it is easier to initiate and sustain than the facts in the lab would indicate.