Knowing Where the Next Meal is Coming From

Most Americans have little knowledge of the world outside their borders.

Knowledge about Canada -- other than it is a vast land of ice and snow where people live in igloos and wrestle with polar bears each day -- is very slim among the American public.

This graph will surprise a lot of people: 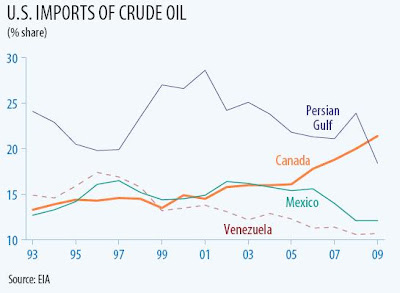 The idea that most of the imported oil comes from Canada and not the Persian Gulf or from Mexico or Venezuela will surprise most people. They have a hard time picturing those oil wells among the igloos.

I like to compare the US/Canada relationship to that of Germany/Denmark. The bigger country wags the little country's tail for it. Germany invaded Denmark in 1939. The US has tried to invade Canada but got boxed around the ears and gave up.

While Canada is pumping its little heart out to supply oil, I suspect forces are brewing in the US to pull another "seal pup" on Canada. Just like the US destroyed Canada's sealing industry by putting up pictures of adorable little seal pups, there are efforts in the US to paint the oil sands industry in Canada as an ugly polluter leading to runaway global warming. Funny, the US is happy to get the oil, but rather than be happy with the exchange, the US wants to take the oil while preaching at Canada about "greenhouse gases" (note: producing oil from oil sand requires heat that usually means burning natural gas and creating CO2). My answer: don't burn the oil we ship across the border! That way you can preach and not be hypocritical.
Posted by RYviewpoint at 3:36 PM

I am ignorant about where the oil comes from, too. I certainly didn't know about Canadian oil. I need to look into this sand oil process.

I remember the campaign against seal killing, but I had kind of forgotten about it. Pretty little white seals and blood all over the snow.. This brings out emotional irrationality and action with out any real understanding of the situation. Many things in life are done this way. I know the logging industry has had its share of this kind of propaganda. On the one hand there are those kinds of people who don't care about the environment or ecosystem and destroy things for future generations and there are those who do their work with the future in mind and do as little harm as possible. Logging old growth trees can be beneficial to the forest and takes care of many management problems, but many choose to believe the pictures of strip logging are the way all logging is done. The pictures are not lies until they are used against all of the industry.

As you point out, we are getting our oil from a process that puts a little carbon in the air, and for the most part, most Americans are ignorant of the process or where the fuel they burn is coming from. Many will try to shut down the supply if they are shown enough bad pictures of that industry. The other side of this is if they believe that bio type fuels are a good alternative because they are never shown the process and how much it pollutes the air, or how much it is affecting the price of grains therefore the price of meat. We are being fed a line of a type of propaganda to further certain interests and not given the whole picture. Many don't want to know the whole picture, anyway. We just want to ignorantly go on in our happy world, justified because we have done something "green".

Thomas: The point that "Ignorance is shameful; self-righteous ignorance is a sin." is true but must be tempered. Most people are too busy just getting by in life to be held responsible for not knowing things. Where I want to put blame is on those who manipulate that ignorance to their own benefit. It is those who rile up the uninformed and turn them into the "activist" misinformed who are the real danger to society.

Those pictures of baby seals sure got a lot of uninformed people to open their purses. Here's a typical example where environmental "experts" Paul and Linda McCartney are flown in to do a "photo op" then fly right out. It's a really effective emotional appeal. But it is completely stage-managed and inaccurate.

Canada bans clubbing baby seals because of the uproar. But mature seals are still harvested. Why? Their pelts are valuable and the compete for fish. How many cattle ranchers in the US would like to see pictures of wolf pups frolicking while a voice over tells people that ranchers want to kill these lovable animals. Well, they did. Why? Wolves will eat prey and cattle are a supremely easy prey to kill.

There are a few nuts who think that humans should let wolves multiply like crazy, but sensible people realize that while a controlled population of wolves in the back country is fine and essential to wildlife management, having wolves freely "hunting" in suburbs and urban areas is a good way to have the cull young children from our human "herds".

Nobody is big on producing oil from oil sands. It is a big, expensive, energy intensive, environmentally ugly process. But until we change our technology that's the future. I would say it is better to buy oil from Canada than to send it to the Middle East where a good portion of every dollar shipped there ends up in the hands of terrorists.

The US needs a "Manhatten Project" commitment to a new energy future. It needs a mix of nuclear, solar, wind, geo-thermal, hydro power generation while it weans itself from fossil fuel. This process will probably take the rest of this century.

You make a lot of good points about forestry. Logging can be done well or poorly. Forestry management needs to be done well and that includes logging and prescribed burns. The reason that big fires have swept the US is that for too long no wildfires were permitted. The "Smokey the Bear" types would allow even one small fire, so they got giant fires instead.

The tragedy in British Columbia is that our government was slow to react to a mountain pine beetle infestation and it has consumed 16 million hectares (see here). According to Wikipedia the US infestation is 8,100 sq. km. But that is only one-twentieth of the infested area in British Columbia. This makes fights over logging practices and "old growth" logging pale in consideration. But while the environmentalists got lots of publicity over their worries about logging practices, nobody was out getting publicity for better forestry management practices, especially pre-emptive felling of vast swaths of trees to limit the infestation. As a consequence, huge, huge areas are now just denuded trunks of dead trees.

Life is complicated and ten second sound bytes will never be up to the task of explaining the complexity or properly mobilizing the right resources or deploying them properly.