A Scientist Sells His Book

Here are some bits from a post by Roy W. Spencer where he puts forward the key arguments in his new book: 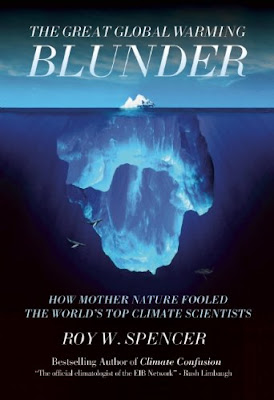 About one-half of Blunder is a non-technical description of our new peer reviewed and soon-to-be-published research which supports the opinion that a majority of Americans already hold: that warming in recent decades is mostly due to a natural cycle in the climate system — not to an increase in atmospheric carbon dioxide from fossil fuel burning.

Believe it or not, this potential natural explanation for recent warming has never been seriously researched by climate scientists. The main reason they have ignored this possibility is that they cannot think of what might have caused it.

You see, climate researchers are rather myopic. They think that the only way for global-average temperatures to change is for the climate system to be forced ‘externally’…by a change in the output of the sun, or by a large volcanic eruption. These are events which occur external to the normal, internal operation of the climate system.

But what they have ignored is the potential for the climate system to cause its own climate change. Climate change is simply what the system does, owing to its complex, dynamic, chaotic internal behavior.

As I travel around the country, I find that the public instinctively understands the possibility that there are natural climate cycles. Unfortunately, it is the climate “experts” who have difficulty grasping the concept. This is why I am taking my case to the public in this book. The climate research community long ago took the wrong fork in the road, and I am afraid that it might be too late for them to turn back.

The most obvious way for warming to be caused naturally is for small, natural fluctuations in the circulation patterns of the atmosphere and ocean to result in a 1% or 2% decrease in global cloud cover. Clouds are the Earth’s sunshade, and if cloud cover changes for any reason, you have global warming — or global cooling.

How could the experts have missed such a simple explanation? Because they have convinced themselves that only a temperature change can cause a cloud cover change, and not the other way around. The issue is one of causation. They have not accounted for cloud changes causing temperature changes.

The supposed explanation that global warming is due to increasing atmospheric carbon dioxide from our burning of fossil fuels turns out to be based upon little more than circumstantial evidence. It is partly a symptom of our rather primitive understanding of how the climate system works.

And I predict that the proposed cure for global warming – reducing greenhouse gas emissions – will someday seem as outdated as using leeches to cure human illnesses.

Nevertheless, despite the fact that scientific knowledge is continually changing, it is increasingly apparent that the politicians are not going to let little things like facts get in their way. For instance, a new draft climate change report was released by the U.S. yesterday (April 19) which, in part, says: “Global warming is unequivocal and primarily human-induced … Global temperature has increased over the past 50 years. This observed increase is due primarily to human-induced emissions of heat-trapping gases.”

You see, the legislative train left the station many years ago, and no amount of new science will slow it down as it accelerates toward its final destination: forcibly reducing greenhouse gas emissions.

But in Blunder I address what other scientists should have the courage to admit: that maybe putting more CO2 in the atmosphere is a good thing. Given that it is necessary for life on Earth, the amount of CO2 in the atmosphere is surprisingly small. We already know that nature is gobbling up 50% of what humanity produces, no matter how fast we produce it. So, it is only logical to address the possibility that nature — that life on Earth — has actually been starved for carbon dioxide.

Posted by RYviewpoint at 7:09 PM