The rest of the world gets a chuckle at the nearly unanimous American complaint about "burdonsome taxes". And you would think from the "tea party" movement that those taxes have been racheting inexorably up over the past few decades. Nope! Take a look... 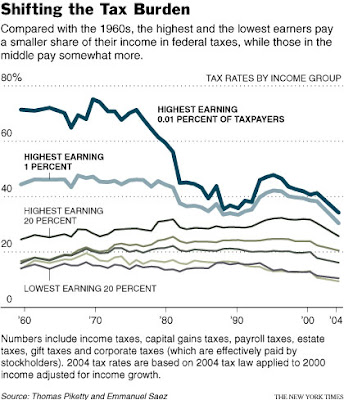 I do declare... those are crocodile tears pouring from American eyes. That pain! The pain!

Give me a break. The rest of the civilized world pays much more in taxes in order to support a civil society. But the US has decided to "outsource" its civil society into the hands of armed strangers who strut around mumbling about "2nd Amendment rights". Wonderful. Instead of schools, bridges, and a minimal standard of decency, the US would rather say "Hell No!" to taxes and spend their time running around with signs about their "oppressive" and "socialistic" government.

The graph above is proof that the right wing billionaires have manipulated evangelicals with fears about gay marriage, abortion, prayer in school, flag burning, and feminism in order to get their legislative agenda passed: they got their taxes chopped by 50%. That was money well spent!
Posted by RYviewpoint at 8:28 PM