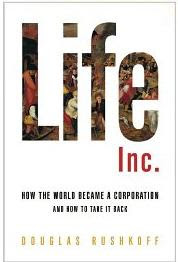 This is a very provocative book. It is full of interesting insights. It is a joy to read. But ulitmately I distrust it. There are things about Rushkoff that keep me leery of him. In this book he:

Consequently I don't trust Rushkoff. But that doesn't mean I don't enjoy his writing. His style is an onrushing avalanche of ideas that you catch as you can while he heaps the on. They are thought provoking. But I would adopt none without more research. But this is the book for you if you want to get a critique of modern society.

For example, here is his critique of game theory and economics. He talks about the think tank, the Rand Corporation, and its study of the famous "prisoner's dilemma" that predicts no cooperation:

The Rand scientists believed that mutual distrust should rule the day. ... They tested their ideas on Rand's own secretaries, creating all sorts of different scenarios in which the women could cooperate with or betray one another. In every single experiment, however, instead of making choices in the self-interested way that Rand expected, the secretaries chose to cooperate.

This didn't deter John Nash, the Rand mathematician portrayed by Russell Crowe in the movie A Beautiful Mind, from cointinuing to develop game scenarios for the government based on presumptions of fear and self-interset. An undiagnosed paranoid schizophrenic, Nash blamed the failed experiments on the secretaries themselves. They were unfit subjects, incapable of following the simple "ground rules" that they should strategize selfishly. Nash remained committed to the rather paranoid view that human beings are suspicious creatures, constantly making strategic assessments about one another and calculating how to gain a competitive advantage in any situation.<

Game theory worked quite well in poker, anyway, from which it originated. And what better model existed for the high-stakes nuclear standoff between the United States and the U.S.S.R.? Offering to give up all of one's weapons was impossible, because there was no way of knowing whether the enemy had really done the same or merely bluffed about his holdings. Instead, each nation had to maintain a nuclear arsenal in order to deter the other from using its own, and bringing about what was known as mutually assured destruction, or MAD. The fact that a nuclear war did not break out served as the best evidence that Nash's theoretical framework was sound.

Encouraged by this success as well as by the voices in his head, Nash applied his game theory to all forms of human interaction. He won a Nobel Prize for showing that a system driven by suspicion and self-interest cold reach a state of equilibrium in which everyone's needs were met. "It is understood not to be a cooperative ideal," he later admitted, but -- at least at the time -- neither he nor Rand thought human beings to be cooperative creatures. In fact, if the people in Nash's equations attempted to cooperate, the results became much more dangerous, messy, and unpredictable. Altruism was simply too blurry.

The book is fascinating. It is rich in linkages to history, concepts, key thinkers, and historic events. These are all thought provoking. The key, however, is not to simply swallow the line that Rushkoff is laying down. I distrust him. I think every reader should be very cautious in simply accepting Rushkoff's analysis. Use it to spark ideas, but don't simply swallow it.

I find Rushkoff inconsistent. He talks about building an economy away from the "corporatist world", but he has published his book via Random House. He waxes enthusiastic about alternative currencies and talks about his own involvement with local groups building "alternative communities". But I've seen all this before. My personal experience is with the 1960s and the "back to the land" movement which was going to change everything. It was a complete flop. If you look further back into American history you see all kinds of idealists building their version of a New Jerusalem that usually failed after a few years. The longest lived lasted only a few decades. That says to me all these words about how the corporate world is a bloodless, heartless regime and "if only" we could get back to the warm little personal communities of the past, then all would be well, is a lie. I'm pretty sure those little "alternative communities" were a hell hole. I'm pretty sure those idyllic "memories" of small rural life a few hundred years ago are a myth. I'm quite happy with the centrally heated, suburban, car-dominated, convenience store, strip mall world I live in. I don't think Rushkoff offers me an alternative world I would want to live in.

I understand and agree with most of the criticisms Rushkoff makes of "corporate America" and worldwide "corporatism". But I'm an ameliorist. I think we can fix things slowly by working from inside. I don't see any "back to the land" revolt of any "alternative current/community" proclamation by Rushkoff having any traction.
Posted by RYviewpoint at 9:07 PM