Maya Angelou's "Letter to My Daughter" 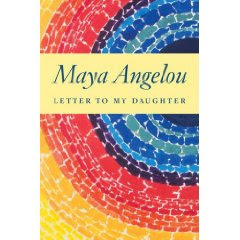 I've enjoyed Maya Angelou's writings for years. This one is a miscellany gathered under the pretense of a "letter to my daughter". It isn't. It is just a collection of short pieces that run across her life. It is entertaining, but it won't knock your socks off.

Here's a bit from one of the chapters entitled "National Spirit" that I especially enjoyed:

For the past four decades our national spirit and natural joy have ebbed. Our national expectations have diminished. Our hope for the future has waned to such a degree that we risk sneers and snorts of derision when we confess that we are hoping for bright tomorrows.

How have we come so late and lonely to this place? When did we relinquish our desire for a high moral ground to those who clutter our national landscape with vulgar accusations and gross speculations?

Are we not the same people who have fought a war in Europe to eradicate an Aryan threat to murder an entire race? Have we not worked, prayed, planned to create a better world? Are we not the same citizens who struggled, marched, and went to jail to obliterate legalized racism from our country? Didn't we dream of a country where freedom was in the national conscience and dignity was the goal?

We must insist that the men and women who expect to lead us recognize the true desires of those who are being led. We do not choose to be herded into a building burning with hate nor into a system rife with intolerance.

I love those words, but Angelou lived in the years when Lester Maddox got cheers from the crowd when he showed off his axe handle in his restaurant and waved it as a governor of Georgia. She lived in the time when George Wallace barred the door to a black student at 'Ole Miss and went on to run as a populist presidential candidate adored by crowds of rednecks and racists.

Her words are wonderful, but they are only half the story. The United States has not fallen from grace. It has always had a portion touched with yearnings for a higher mission while a "silent majority" was quite happy to hoot down any intellectual and pride themselves in their bigotry and ignorance.
Posted by RYviewpoint at 2:34 PM