Anthony Watts has a blog that monitors global warming as well as other scientific bric-a-brac. Watts' lastest blog entry provides an article written by Roy W. Spencer, a climate scientist and a "global warming optimist", that identifies a possible error in the International Panel on Climate Change (IPCC) climate models. He notes that the Pacific Decadal Oscillation (PDO) may account for much of the heating that has been attributed to greenhouse gases by the IPCC. Here is a graphic showing the discrepancy. 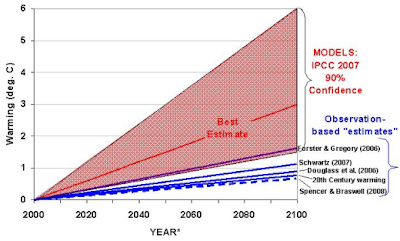 Here is material from the conclusion of Spencer's article. Notice how Spencer says he is forced to go around the news media in order to get his scientific ideas heard (I've bolded that bit):

The evidence continues to mount that the IPCC models are too sensitive (produce too much global warming). If climate sensitivity is indeed considerably less than the IPCC claims it to be, then increasing CO2 alone can not explain recent global warming. The evidence presented here suggests that most of that warming might well have been caused by cloud changes associated with a natural mode of climate variability: the Pacific Decadal Oscillation.

I am posting this information in advance of publication because of its potential importance to pending EPA regulations or congressional legislation which assume that carbon dioxide is a major driver of climate change. Since the news media now refuses to report on peer-reviewed scientific articles which contradict the views of the IPCC, Al Gore, and James Hansen, I am forced to bypass them entirely.

We need to consider the very real possibility that atmospheric carbon dioxide - which is necessary for life on Earth and of which there is precious little - might well be like the innocent bystander who has been unjustly accused of a crime based upon little more than circumstantial evidence.

Posted by RYviewpoint at 7:24 PM