David Orrell's "The Other Side of the Coin" 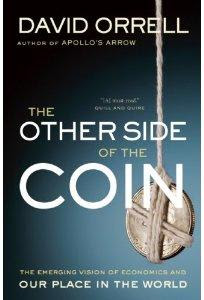 This is a very interesting "alternative" view of economics. The book is built around the theme that Western science was heavily influenced by Pythagoras with its predilection for an analysis that is linear, static, and "male". Orrell, a mathematician, introduces us to the new concepts coming out of math that should (and are slowly) changing the simplistic and inadequate economics taught and used today. Here's a relevant quote from the last chapter of the book:

Other areas of science, such as ecology and systems biology, have actively embraced techniques from nonlinear dynamics, network theory, and complexity, but economics lags behind. Neoclassical economists are still trying to prove the validity of their arguments with "real equations," but they are using the equations of the nineteenth century. Apart from the trading algorithms used by some hedge funds or banks, new mathematical methods have had amazingly little impact. As economicst Steve Keen wrote in 2001, most economists are trained only in simple linear equations, and are isolated "from much of what is new and interesting in mathematical theory and practice, let along from what scientists in other sciences are doing." This is especially strange given that the economy is so obviously non-linear, networked, and complex (Pareto spotted power-law distributions before biologists did); and, furthermore, directly impacts the lives of billions of people (so you would expect the field to adopt best practices.)

This, and the various chapters of the book, are a stunning rebuke of classical and neoclassical economics with its "head in the sand" approach to modeling the real world.

The book takes the general reader through a number of topics that make the reader recognize how backward and inward economics has become. No wonder nobody in the field saw the Great Recession coming. And no wonder that conventional economists have no clear theory or remedies for the situation. They have built a house of cards around assumptions that simply don't apply. Rather than pursue a science that accepts the world as it is and work hard to analyze and explicate it with appropriate theories, economics fell in love with a modeling technique in the 19th century that is simply wrong. Economics has made no real progress because it uses analytical tools that don't fit the nature of human economic activity. Unlike scientists who adjust theories to fit the facts, economists have clung to their theoretical assumptions and ignored facts so that they can continue to do "economics" that is completely irrelevant to the way the world actually works. It is stunning. But that is the indictment by Orrell, and it is well documented and explained by him in this book.

This is a "must read" for anybody puzzled why our economy can collapse as easily as it did. It simply comes down to the fact that the "science" of economics has little to say about the real world and politicians have been fed this "science" of economics which locks them into political positions that are simply wrong for the world we live in.

Orrell condemns economics as it is currently taught and practiced as a "counterfeit science":

Given that neither the axioms nor the conclusions of neoclassical economics stand up to scrutiny, it follows that the equations are not an accurate model of a market economy. They give a distorted, oversimplified picture that represents only one side of a far more complex reality. But how about free markets themselves? Are they good, evil, or a fuzzy mix of the two?

Economists -- be they in academia, government, or private institutions -- are trained to shy away from such a direct phrasing of the question. The field has long modeled itself after objective sciences such as chemistry and physics, and aims to make purely neutral statements about the economy that are untainted by political or ethical considerations. It accomplishes this aim by radically dividing the world into objective and subjective components. Preferences are assumed to be known and fixed, so they can be modeled objectively, but the reasons for the preferences are assumed to be entirely subjective. It is thus impossible to say that any kind of behavior is better than any other. And because society is just the sum of individuals, there is no reason to distinguish between the utility of a single person, and the utility of society as a whole. The economy is therefore a machine for maximizing utility that does not need to be guided by political or ethical considerations. Value judgements are unnecessary, because the market is always right.

This is the kind of thinking that creates a "greed is good" culture where government sees no responsibility to regulate and no obligation to provide a safety net for the disadvantaged. It is an ugly world built on a "beautiful theory" that isn't a science and doesn't apply to the real world. It creates a "value free" economics that justifies grave moral wrongs under the pretense of "objective science".

Read the book. It is an eye-opener.
Posted by RYviewpoint at 4:20 PM